The MacLeods and Campbells

Monica’s first two trilogies, The MacLeods and the Campbells, were published in back-to-back months in 2007 & 2009 respectively. Although conceived of as trilogies, the books can be read as a series, as the stories take place chronologically. But, like all of Monica’s books, each book stands on its own and can be read in whatever order you like! 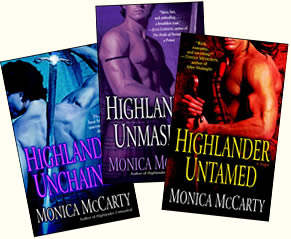 Although these books were published before The Highland Guard series, they actually take place about three hundred years after. Fun tidbit: The two series are not connected, but some of the characters in the MacLeod and Campbell trilogies are descendants of the Guardsmen in the Highland Guard Series.

:: 1567 Mary Queen of Scots abdicates to her son James VI

:: 1597 Chiefs must provide charters for their land

:: 1603 Union of the Crowns James VI of Scotland and James I of England

The MacLeod and Campbell Trilogies in Context

Summarizing a couple hundred years in a few paragraphs is perhaps doomed to gross over-simplification, but I think it’s useful to try to put the MacLeod trilogy in context of the major social and political shift that was taking place in the Highlands at the end of the 16th and into 17th Century—the period around the Union of the Crowns in 1603 when King James VI of Scotland became King James I of England on the death of Elizabeth I.

In 1493 the Lordship of the Isles was forfeited to the crown, ushering in an era known as Linn nan Creach, the Age of Feuds and Forays, which ended around 1616-1620. The Lordship of the Isles represented the height of Gaelic political power and culture in Scotland. From the mid-fourteenth century until the forfeiture, the Lords of the Isles under the leadership of clan Donald effectively ruled a large part of the West and the Isles independent of the rest of Scotland. The chiefs basically obeyed the Scottish king at their pleasure. But with the forfeiture, the chiefs became tenants of the crown rather than vassals of clan Donald. The removal of the authority of clan Donald coupled with the weak central government and its inability to exercise control over the remote Highlands let loose the bloodshed and feuding from whence the era gets its name.

By the late 16th Century the “Highland problem” was coming to a head. Subduing the wild Highlands had become the fervent policy of King James VI, first by statute and then by colonization and coercion. Upon assuming full power in 1587, the king began to enact a series of laws intending to (1) curtail the power of the chiefs (2) strike at the heart of the Gaelic culture and (3) take control of clan lands.

The first of the major acts, the General Band in 1587, required the chiefs to provide surety for their clansmen and present themselves before the king every year in Edinburgh. In other words, in an effort to control the lawlessness of the Highlands, the king was holding the chiefs accountable for the unlawful deeds of their clansmen.

Ten years later, in 1597, in an effort to gain control of clan lands, the king ordered the chiefs to provide charters for their land—land that had been held by the clans for hundreds of years—with the deliberate intention of forfeiture. The king was convinced that the Highlands were an un-mined source of gold from which to fill his depleted coffers. This statute would also provide the foundation for his policy of colonization (which plays prominently in Highlander Unmasked).

In 1609, key Highland chiefs were kidnapped on a ship and held until they agreed to the king’s demands codified as the Statutes of Iona. The Statutes of Iona struck right at the heart of the Gaelic culture by proscribing many of the traditions of the clans. For example: restricting the number of guardsmen and birlinns, proscribing the bards, and ordering the chiefs sons to be educated in the lowlands. Although the Statutes were not immediately adhered to, by 1616 the Privy Council had made it policy. The Statutes were the beginning of the attempt to eradicate Gaelic culture which we would see brought nearly to fruition over a hundred years later following the Highlanders defeat at Culloden.

Although Lowlanders might grudgingly admire the Highlander’s battle skills, the “wyld, wykkyd Heland-men” were thought of as “barbarous and evill disposit pepill.” (The latter quote is from an Act of Parliament.) The Highlands were largely viewed as a foreign place separate from the rest of Scotland. It is not surprising then that many of the laws focused on destroying this alien culture. Not only were there prohibitions on the number of birlinns, the number of fighting men, bards, sorning (the housing of fighting men by the clansmen) and calps (payment due a chief on death of clan member), but the heart of any culture—its language—was systematically eroded. By 1616 no heir would be allowed to inherit unless he could read, write and speak English. Eventually, after Culloden, speaking Gaelic would be banned.

The political shift was equally dramatic. Perhaps the greatest beneficiaries out of this period of unrest following the forfeiture of the Lordship were clan Campbell (under the head of the Earl of Argyll) who along with Clan Gordon acted as agents for the state at the expense of Clan Donald, the former Lords of the Isles. But behind this local shift in power from Clan Donald to Clan Campbell was the strengthening of the central government (the king)—especially with the Union of the Crowns and the king’s increased naval power—at the expense of the clan chief. By the end of the era, the “barbarian” Highland chiefs had begun to adopt more lowland ways and were much more willing to submit to the authority of the king, including a movement from feuds and warfare to paper—i.e. litigation.

The political and social tensions facing the Highland chiefs as they fought to hold their power and way of life are what drew me to this period. In the MacLeod trilogy, spanning the years 1599-1608, I tried to show a progression of these tensions. In Highlander Untamed, Rory MacLeod, Chief of MacLeod, is the powerful Highland chief chaffing at the restrictive bridle his king seeks to impose on him—even so, Rory largely ignores that he has been “put to the horn” (declared outlaw). By Highlander Unmasked Meg espouses what has become a reality—the waning power of chief against a stronger king who could no longer be ignored. The subject matter of Highlander Unmasked itself is the Highland struggle against King James’s efforts at colonization. By Highlander Unchained the king’s authority is more accepted. Highlander Unchained also explores the alien customs and way of life of the Highlands, as well as the perception of Highlanders as barbarians. Significantly, Lachlan Maclean of Coll would be one of the last generation of Highland chiefs who was unable to read or write in English. It was an end of an era indeed.

My second trilogy (spanning roughly 1606 to 1609) focuses on the shift in power to Clan Campbell and the growing influence of the Earl of Argyll. History has painted the Campbells, and Archibald the Grim, the 7th Earl of Argyll in particular, with a black brush. But the clan was a large one with numerous branches, and I suspect whether you reviled Argyll had something to do with whether your name was Campbell. Highland Warrior looks at the infamous feud with the MacGregors from the Campbell point of view and Highland Outlaw presents the MacGregor side. Highland Scoundrel focuses on the feud with the equally powerful Clan Gordon (headed by the Earl of Huntly). You can read more about Archibald the Grim in the special features section for Highland Warrior.

The Books in Pictures (a slideshow)

On the Cutting Room Floor

(A new window will open)

Can’t keep all those clan relationships straight? Here is a (very) simplified family tree of the MacLeods, MacLeans and Campbells as they appear in the MacLeod Trilogy. As this is not intended to be used for genealogy purposes, there are no dates (which are often inconsistent between sources).

Or here is a (very) simplified family tree of the MacGregors as they appear in the Campbell Trilogy. As this is not intended to be used for genealogy purposes, there are few dates (which are often inconsistent between sources).