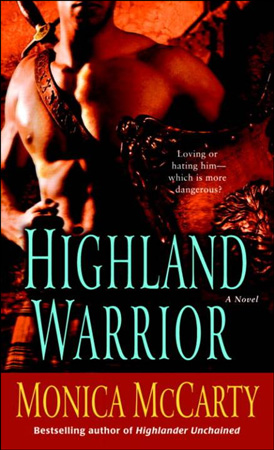 Book One of the Campbells

The ruthless enforcer of Scotland’s most powerful clan, Jamie Campbell is the most feared man in the Highlands. Raw physical strength coupled with cunning political acumen make him a powerful force with whom few men will dare to reckon. Determined to see the Highlands tamed of its lawlessness and unrest, Jamie’s objectives are clear: under the guise of seeking the Chief of Lamont’s daughter’s hand in marriage, discover whether the Lamonts are harboring any outlawed MacGregors. But guise turns to desire when he meets the beautiful spitfire who rules the household with a dainty iron fist. The fierce Highlander never expects that the woman he wants above all others will test his duty and loyalty to his clan to the breaking point.

Cosseted and adored by her family, Caitrina Lamont has no intention of abandoning her beloved father and doting four older brothers for a husband—especially a Campbell. But Jamie Campbell is nothing like the parade of suitors that Caitrina’s father usually traipses across their hall. His raw masculinity threatens her in a way no man ever had before. But when Caitrina’s idyllic world is shattered, could the man she blames for her tragedy become her only hope for the future? 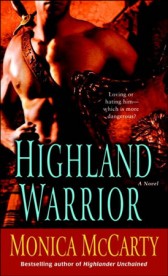 An Excerpt From Chapter One: Our heroine manages to find herself stuck in a tree, wearing only a sark (shift), and about to be deserted by her younger brother, Brian.

Caitrina took a moment to catch her breath and steady her heartbeat, then started to work her way down.

She turned at the sound of his fading voice, but it was already too late.

“Wait, Brian, I need your . . .” Her voice dropped off. Help. She could just make out his back as he turned the corner out of earshot, running back toward the castle.

She looked down, realizing she was still too far off the ground. A few more branches and she should be able to drop just like Brian. Carefully, she grasped a branch with her hands and lowered one foot and then the other—

The sound of a loud crack signaled disaster. For a moment her stomach rose to her chin, body weightless as she dropped. She grasped the branch above her head just as the one under her feet cracked at the trunk and bent at a perilous angle to the ground. Her brother’s weight must have weakened it. If she let go now, the branch would probably give way entirely and she’d go crashing to the ground. She wasn’t quite hanging by her fingertips, but almost.
She was also stuck. She looked down past her toes. The ground was at least fifteen feet below—still too far to attempt a drop.

She’d have to wait until Brian remembered. She groaned, realizing she might be here all night.

“I think you already said that.”

Caitrina gasped at the sound of a deep voice—a deep male voice. She looked down and her eyes locked on the steely gaze of a stranger who stood a few feet away, watching her with an amused glint in his eyes. How long he’d been standing there she didn’t know, but it had been long enough for him to dismount from the massive destrier at his side.

She didn’t know whether to be relieved or embarrassed—probably a little of both. She had need of a rescuer but would have preferred him not to be so—she frowned, searching for the right word—masculine. Blatantly so.

From her current position hanging so far from the ground, it was difficult to gauge precisely, but she would guess he stood at least a handful of inches over six feet. A giant by any standard—even a Highland one.

If he was a Highlander.

He’d spoken in Scots and not in the Highland tongue, but she thought she’d detected a hint of brogue in his voice. It was difficult to tell from his clothing. He wasn’t wearing the breacan feile of the Highlands, but that wasn’t unusual for a man of wealth and position. And on that account she had no doubt. Even from a distance she could see that the black leather doublet and trews he wore were of exceptional quality.

But the fine clothing did little to camouflage the savage beauty of his broad chest and powerfully muscled arms and legs. His impressive build coupled with the enormous claidheamhmór sword he wore slung across his back left no doubt in her mind that he was a warrior. And she’d wager an impressive one at that.

But it was more than his size that bothered her. She would also have preferred a rescuer who wasn’t quite so dominating. It was everything about him: his wide commanding stance, the stamp of absolute authority on his face, and the bold way he looked at her. His manner unsettled her so much that it took her a moment to realize how handsome he was. Arrogantly so—as if his expertly chiseled features were a mere afterthought to the force of his overpowering masculinity.

She wasn’t alone in her perusal.

Her body prickled with awareness. Dear God, the way he was looking at her . . . at all of her. His gaze roamed her body from head to toe, lingering at her breasts long enough for a blush to rise in her cheeks. Suddenly she became very conscious of her nearly undressed state. The sark that had seemed a suitable covering a short while ago now felt as insubstantial as gossamer silk under his penetrating stare. It felt as though he could see right through the linen to her bare skin.

She’d always been protected by her father and brothers; no man had ever dared to look at her like this—as if she were a juicy plum ripe for the picking.

And Caitrina didn’t like it one bit. She might not be dressed as one right now, but any man of sense could see that she was a lady—even if he didn’t notice the fancy gown that was plain as day right under his nose.

Who was this bold warrior who held himself like a king?

She would swear she’d never seen him before. From his clothing and weaponry, he was obviously not an outlaw. He was probably a chief from distant lands come for the games—which meant he was owed the sacred obligation of Highland hospitality. But if he was a chief, where were his guardsmen?

Well, chief or not, he shouldn’t be looking at her that way. “Your name, my lord?” she demanded. “You are on Lamont lands.”

“Ah, then I have reached my destination.”

“You are here for the gathering?”

He gave her a long look, one that made her feel he knew something she did not. “Among other things.”

He hadn’t told her his name, but at the moment she didn’t care who he was. She would welcome the devil himself—or, God forbid, one of his Campbell minions—if he would help her down. Her arms were starting to ache from trying to hold most of her weight up as to not put too much weigh on the fragile branch. Her rescuer certainly was taking his time. “Well, are you just going to stand there watching me all day?” she asked impatiently.

His mouth lifted at one corner. “I might just do that. It’s not very often that a man happens upon a half-naked wood nymph climbing a tree.”

Caitrina’s cheeks flamed. “I’m not half-naked, and if you could spare a glance upward”—away from my chest—“you would see that I’m not climbing, but stuck and in need of some assistance.”

Her blustery response seemed only to increase his amusement. Though he wasn’t precisely smiling, his steely blue eyes twinkled as radiantly as the shards of sunlight streaming through the trees.

The wretched brute was laughing at her.

Caitrina narrowed her gaze, not used to being laughed at—particularly by a man. She supposed there was something amusing about the entire situation, but he should have the courtesy not to show it. It left her feeling at a distinct disadvantage, which was silly given her circumstances. She was at a disadvantage. But not for long. When he got her down from here, she would give him a piece of her mind.

She bristled and in her most haughty voice—the one she used with her brothers when she wanted them to do something—said, “Just hurry up and help me down . . . now!”

She realized immediately that issuing demands might not have been the best tactic when the smile that had temporarily lightened his hard expression vanished and his lips thinned into a straight line. He gave her a long stare, then crossed his arms over his broad chest. Her breath caught, confronted with the impressive bulge of muscle. Good gracious, he was strong.

Learn more about the books in the The Campbell Trilogy Trilogy »

See the other books in this series »

→ As an Amazon Associate I earn from qualifying purchases. I also may use affiliate links elsewhere in my site.

Highlander Warrior is a finalist in the National Readers Choice Award for best historical.

Highlander Warrior named a finalist for Best Historical in the CRW Award of Excellence contest.

“Highland Warrior is an intelligent, captivating story. I loved how Ms. McCarty blended fact and fiction in an interesting way, which indicated that the book is well-researched without ever reading like a history lesson. […] Enthralling from beginning to end, Highland Warrior is not to be missed!”
~Shayna at Joyfully Reviewd (posted December 1, 2009)
~ Read the full review

“Highland Warrior is Scottish historical romance at its best, with strong, flawed, and very believable characters and a well-researched background. A treat to read!”
~Amy S., reviewer for Reader to Reader (posted July 1, 2009)
~ Read the full review

4 Cups!
“This is an exciting and involving story. Caitrina and Jamie are both very vivid characters with all the faults and prejudices that were prevalent at the time. The author’s descriptions of the characters and settings are wonderful and the plot is riveting. […] I cannot wait for the rest of the trilogy.”
~ Maura for Coffee Time Romance (posted May 5, 2009)
~ Read the full review

“Highland Warrior is a rousing tale of sword fighting, battles, and a romance that is close to perfect in its telling.”
~ Kate Garrabrant Romantic Reviews Today (posted Feb 24, 2009)

4 1/2 stars – Top Pick and K.I.S.S. Award from Romantic Times!
“The excellence of McCarty's previous Highlander series continues in book one of the Campbell trilogy, which deals with the marriage of two people from feuding clans. She presents a unique insight into the concepts of loyalty, justice and love. Deep emotion and true love prove the Scots proverb 'A law is not justice.'”
~ Romantic Times BOOKreviews (posted Jan 5, 2009)

“Our February Must Have is Highland Warrior by Monica McCarty. And OH, MY WOWSERS! I’m talking mouth hanging open nearly the whole time while I read. And this is a 359 pg book! […] Really, I think this book is the fastest I’ve ever read. And you know what? I’ve got it sitting at my elbow right now. The first chance I have to pick a book up, I’m going to have to bypass that TBR pile and go for another delectable dive into Highland Warrior.”
~ Keri Ford for Everybody Needs a Little Romance (posted Feb 24, 2009)
~ Read the full review

“I loved Monica McCarty's first Highlander trilogy... Now she has gifted us with Highland Warrior, the beginning of another trilogy proving to be just as remarkable as the first. If you are looking for an unforgettable romantic adventure, complete with powerful lairds and strong-willed ladies, set in the Highlands of Scotland and telling a story of honor, love, dignity and pride, you need not look any further. Add this one to your keeper collection. You will treasure it for years to read again. It is a great book. I give it two thumbs up. I can't wait for the next installment. I have fallen in love with the words of Monica McCarty.”