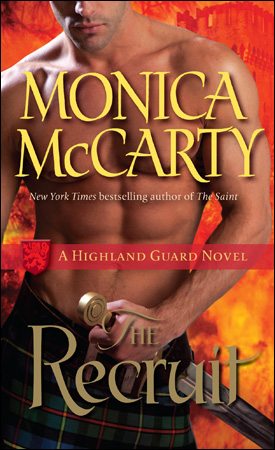 Book Six of the Highland Guard

Fiery, aggressive, and bold, Kenneth Sutherland is a true champion—skilled with any weapon and driven to win. Now Kenneth is ready for his greatest challenge: joining Robert the Bruce’s secret army to fight among the elite. Kenneth’s best chance to attain that honor is by winning the Highland Games. Focused and prepared for victory, he is caught off guard by a lovely wisp of a woman—and a stolen moment of wicked seduction. Her innocent arousal and her shameless hunger fire his blood. He will win his place in the guard—and in Mary of Mar‘s bed.

The ruggedly handsome hero-in-the-making stirs a heart that should know better. Mary vows her surrender will be sport only—no promises, no heartbreak, just one night of incredible passion. Nothing, she swears, will persuade her to give up her hard wrought independence and put her fate in the hands of another powerful man. But with every gentle touch and heart-pounding kiss, Kenneth makes her want more. Now Mary wants his heart. But is this determined champion willing to surrender everything for love?

Our Story Begins: Scotland's King Robert the Bruce is retaking his kingdom from the invading English. To win, he'll need all the grit and courage of his elite band of warriors, the Highland Guard, men who fight without fear and love without limits.

An Excerpt From Chapter Four . . .

Kenneth was in his element, enjoying every minute of his moment in the sun. He'd been born for this. Fighting. Competing. Winning. Aye, most of all winning.

It had taken him years of hard work, determination, and pulling himself out of the mud more times than he wanted to remember, but he was on the cusp of achieving what he'd wanted: to be the best.

One more event to go and a place in Bruce's secret army would be his. He was going to do this, he could feel it. He exulted in the cheers of the crowd, knowing they could feel it, too. Fate and destiny had joined forces behind him, and nothing was going to stand in his way. For the first time, there would be no one in front of him. Tomorrow, after the wrestling event, he would be named champion.

He'd already achieved something no man had ever done before, winning all five weapon events. In one more sign that fate was with him, he'd won the archery contest. It had taken the shot of his life to defeat John MacGregor, but he'd done so by less than a quarter of an inch.

He wished he could have seen MacKay's face. After tomorrow there would be no doubt that he deserved to take his place among the best warriors in Scotland in Bruce's secret army, and his former rival wasn't going to be able to do a damned thing to stop it. Kenneth glanced up to the king's pavilion, pleased to see Bruce clapping along with the rest.

That was when he saw her. His wee voyeur.

He'd found himself looking for her more than once over the past few days—four, he realized—and had begun to wonder whether he'd imagined her. But nay, there she was, sitting serenely and inauspiciously at the end of the king's platform with Alexander MacKenzie and his wife. Was she one of Lady Margaret's attendants, then?

Shedding some light on the mystery should have been enough to put the matter behind him. Right now he should be thinking of only one thing: tomorrow's contest. He shouldn't be wondering what it would be like to be the one to cut those too-tight laces of hers and release some of the passion she had bottled up tightly beneath that austere facade.

Hell, he knew there were men who fantasized about debauching a nun; he just hadn't thought he was one of them. But he couldn't deny the fierce hum that ran through his veins when he thought about ripping off that shapeless black gown that she donned like armor to reveal the wanton he'd glimpsed hiding beneath that fade-into-the-background facade.

He wanted to make her gasp. Wanted to see her lips part and color flood to her cheeks when he touched her. He wanted to be the one to make her shatter for the first time.

To his surprise, when he caught her gaze, he found himself nodding to her.

Acknowledging in some way that he hadn't forgotten her. He'd never singled out a woman so publicly—or done anything that could be construed as romantic—and the gesture took him aback.

Although he doubted anyone else had noticed, she did. He could have seen her eyes widen from halfway across Scotland, let alone the fifty or so paces that separated them.

He was more amused than surprised when she immediately ducked behind the man in front of her. But if she thought she could escape him so easily, she was mistaken.

He amended his earlier decision. Hell, he'd worked hard. He could afford to relax and enjoy a little pre-victory celebration. He wanted her, and waiting no longer seemed necessary.

He started toward her, but he'd barely exited the arena before he found his path blocked by the first of many well-wishers. He heard some form of "Sir Kenneth, you were magnificent," from the female contingent, and "Bloody impressive fighting, Sutherland," from the male.

After working so hard to get here, he should have been savoring every minute of this; it was what he'd always wanted. Yet instead he found himself impatiently scanning the platform and stairs where he'd last seen the lass. But the crowd was too thick and the lass too small for him to pick her out.

He finally managed to extract himself. Threading his way to the base of the stairs, he caught a glimpse of black in the sea of colorful silk moving away from him. He smiled, thinking it ironic that her plain clothing, which he suspected was meant to hide her, was what identified her.

He would have gone after her, but Lady Moira caught him first. "Congratulations, my lord, on yet another victory. Were you by chance looking for someone?" She batted her eyelashes so aggressively he was tempted to ask whether she had something in her eye.

Normally, such coquetry amused him, but right now he found it annoying.

His mouth tightened impatiently as he saw his prey slipping away.

Moira stood with Lady Elizabeth Lindsay, who seemed amused by her companion's efforts. Lady Elizabeth was reputedly devoted to her husband and nothing Kenneth had seen suggested the contrary. She was friendly and polite, but nothing more. Which suited him just fine. Although she was a beautiful woman, she was shrewd, stubborn, and opinionated. He didn't envy Lindsay the headache. Challenges were for the battlefield, not the bedchamber.

"We are all trying to figure it out," Lady Elizabeth said.

"Figure what out?" he asked, glancing over her shoulder, trying to keep his eye on his prey.

"Who the nod was for," Lady Elizabeth said.

He looked at her, barely hiding his surprise. "Nod?"

"Aye, it created quite a stir. The ladies seated around me were all quite sure you were nodding to them," Lady Elizabeth said with a smile.

Ah hell, he guessed it had been more noticeable than he realized. Kenneth hid his reaction behind a wicked smile. "I was," he said.

Lady Moira nearly yelped with pleasure, clapping her hands together. "I knew it. To whom?"

"I'll leave that to you to figure out," he said with a playful wink. "Now, if you'll excuse me. I see my sister, and I need to have her patch me up so I'll be ready for tomorrow's competition."

It was only partially a lie. The blow he'd taken across the ribs was starting to throb beneath his habergeon. The shirt of mail offered scant protection against the impact of steel on bone, and he suspected he had a fairly nasty bruise brewing. He would see Helen to get it fixed up, but after he caught up with his little nun, who was weaving her way through the crowd at nearly a run in her effort to avoid him.

She was only running from the inevitable. Almost as certain as he was that he would win tomorrow, Kenneth was certain that before the night was out, he would have her under him. Or perhaps on top of him.

He felt a pleasant tightening in his groin just thinking about it.

She'd just passed through the gate into the castle when he saw her stop and turn.

"Mary, wait!" he heard someone—a woman—say. He turned, recognizing the speaker as Lady Margaret MacKenzie. "Where are you going in such a rush?"

Mary. He should have guessed. A common, unremarkable name that would draw no attention—just like the rest of her. He was only a few feet away, but she hadn't seen him yet. "I think the sun—"

She stopped suddenly, her eyes widening and mouth caught in an "o" of surprise as she saw him. On such a severe countenance, it shouldn't be so sensual. But it was the same expression that had thrown him over the edge in the barn.

In the sunlight, without the glasses hiding half her face, he got his first really good look at her. Her hair was still hidden beneath an ugly black veil and wimple, her gown was still boxy and shapeless, her skin was still pale, her features were still too sharp—especially her cheekbones, which stuck out prominently over sunken cheeks—and there was still an overall gray, ghostlike quality to her, but on closer scrutiny he knew his instincts had been right. The hint of prettiness and intentional obscuring of beauty was even more obvious in the stark light of day.

There was no hiding her eyes, and they were spectacular. Round and overlarge in her hollow-cheeked face, they were a remarkable greenish-blue, and framed by thick, long lashes that seemed incongruously soft on such an otherwise brittle exterior. Her mouth, too, was soft and full, with a sensual dip that made him think of a bow on a package he wanted to unwrap. Preferably with his tongue.

As soon as their eyes met, she instinctively dropped her gaze as if hiding her eyes from his view.

Hiding. That was exactly what she was doing. The question was why, and from what.

Learn more about the books in the The Highland Guard Series »

See the other books in this series »

→ As an Amazon Associate I earn from qualifying purchases. I also may use affiliate links elsewhere in my site.

The Recruit is a RITA finalist!

The Recruit is a finalist in the Write Touch contest

The Recruit is a finalist in the Golden Quill contest

RT Book Reviews: 4 ½ Star Top Pick & KISS Award
“The sixth book in the highly regarded Highland Guard series is filled with believable characters, intense emotions and a fast-paced intricate plot seamlessly interwoven with romance and plenty of historical detail. The strong, clearly written story and heated sexual tension will leave readers breathless. This is a book that can be read again and again.”
~ Reviewer, Kathe Robin
~ Read the full review

Fresh Fiction:
“Monica McCarty did a superb job of fleshing out her characters -- Kenneth Sutherland is a strong, rough-hewn warrior with a tender side hidden under his armor and Mary is a complex, multi-layered woman who is a mother, wife, and lover. The descriptions of the Scottish and English countryside are breathtaking and I felt like I had been transported back in time. Definitely a book to add to your to be read list.”
~ Reviewer, Cheryl Beal
~ Read the full review